Weekends are for Skis and Bikes

First pic is one that I found on my cell phone from the guys ski trip. We had eaten at Rasta Pasta and on the way out spotted a rasta colored knit cap with dreads. I made my brother put in on and grab the magic stick for a pose. That's big Dave on the right. Good times. 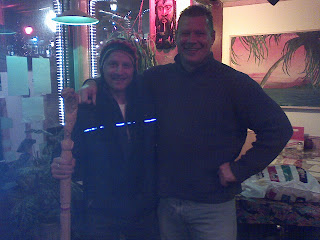 This weekend had a great forecast and although I've been coming off of a cold I knew it would be great to get out on the bike. On the other hand, some locals bought the equipment and started grooming a skating trail at Raccoon River Park. I wanted to combine both. 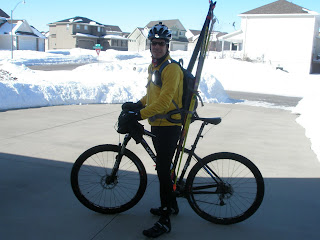 I know that my family and the vast majority of my friends will look at the this picture and say something like "what a dork". However, I felt like an explorer getting ready to tackle the great beyond. 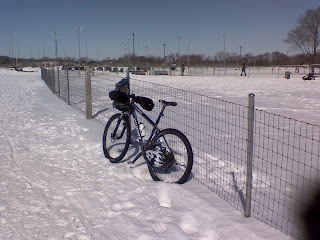 The route was via the Clive Greenbelt towards Denmans and then the back way into Raccoon River Park. It took about an hour to get there and then I parked the bike at the dog park and changed into my ski boots. 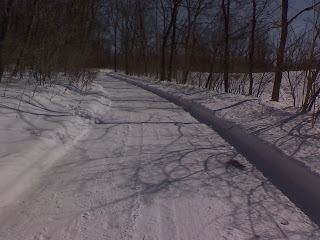 I did a quick 20min explore (medium pace) and hoped back on the bike for the trip home. This time I went north through West Des Moines and caught the trail near Clive City Hall. The above photo was behind Menards. The trail was in pretty good shape with the exception of a few slick areas between 72nd and 86th streets (behind the oil storage area).
It was a good time and good experience. Total of around 25miles. 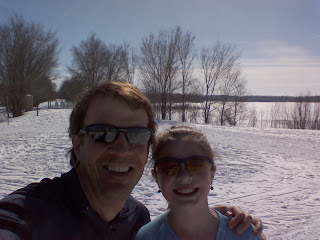 Sunday was for Hannah and I. A ski race was set for 2pm, so we rented some skis for her and went back out to Raccoon River Park to warm up and explore the trails together. It was a warm and sunny day near 34, but felt close to 50 in the sun. 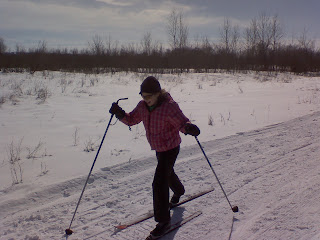 Hannah took right to the XC skiing and loved getting out into the woods. Our plan was to ski together and get my warm-up in, then she would hang out for the 15min while I raced. However, Mark just assumed that she was racing and placed her name on the roster. She wasn't so sure, but with gentle prodding by the other 5 racers, she decided to give it a go. 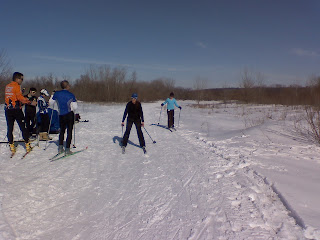 Hannah did a shortened loop (this was supposed to be fun, right?). The other women racer (did a full loop) chased her down on the home stretch. We all encouraged them to the finish line and Hannah lost the sprint by a nose. I was so proud of her and her 23min effort. She also said that she really enjoyed it, so it was a win/win. 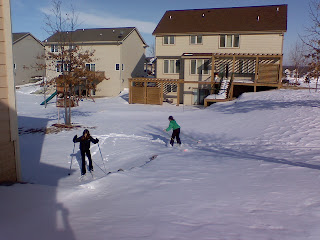 We drove home and shared the skis with Maddie (she had been doing homework). Hannah put my skis on and the two of them explored the back yard and laughed a lot. Another successful weekend.
Posted by Iowagriz at 7:52 PM 1 comment: 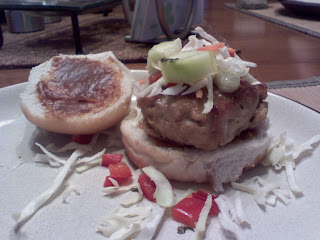 Another great ski trip with the boys. High School pal David and Bro Tim. I drove over and picked them up at the Denver airport on Wednesday and we drove up to Breckenridge. We had the traditional sushi dinner on the first night and hit the local bars. 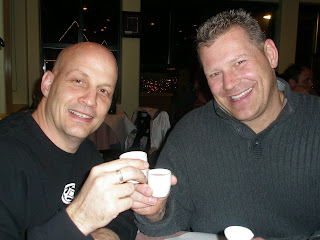 The nightlife was definitely lacking, but we were all tired from traveling and fine with hitting the hay early. Thursday was spent at Breckenridge. As luck would have it, Andy had a day off and was happy to give us a tour of the mountain. Although it was cold and windy, we had a blast. No pics from me on this day.
On Friday, we drove over to Vail and were greeted with 5" of new snow. It skied deeper and we had a blast ripping up the back bowls and exploring the trees between the runs. 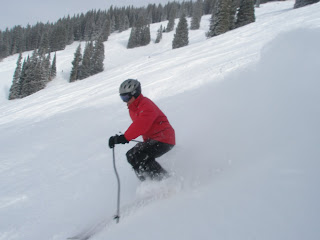 Tim's first run of the day at Vail. 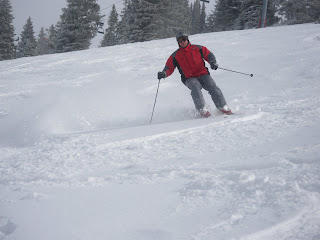 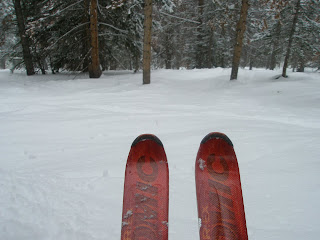 Scouting the trees.
Saturday was at Keystone. We had another 5" of snow and it was windy again. It was my first time at Keystone so it took awhile to get my bearings. We spent a lot of time in the trees and found some good shots and snow over the boots to mid-thigh (in spots). Lots of fun. We stopped by Andy's workplace to say goodbye and called it a day.

The evenings were all dead. We think because it was just before presidents day weekend. Of course, it could be that everyone goes out late and us "old guys" like to be in bed by 10pm. 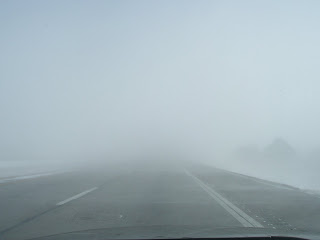 My drove home started at 4am MST. I woke to 3" of new fluff in Denver and the first hour was only at 50mph at best. Then it opened up and I made good time until about 125 miles outside of Omaha. The wind was blowing the snow across the highway and dropping visibility to zero (see above). I saw several crashes and was worried about someone stopping in front of me, or barreling into me from behind. I can see how these accidents happen, not a fun situation. 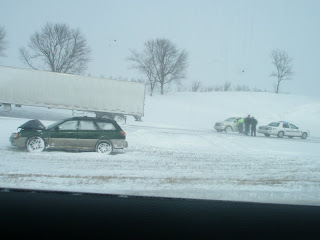 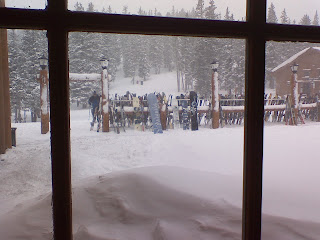 Noon at Keystone. Another 3-5" of snow, but we are finding knee deep in the trees.
Posted by Iowagriz at 5:19 PM No comments: 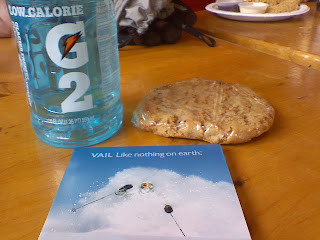 To learn how you can snap pictures and capture videos with your wireless phone visit www.verizonwireless.com/picture.

Note: To play video messages sent to email, QuickTime� 6.5 or higher is required. 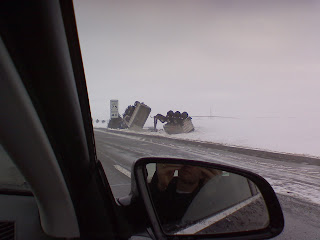 Left ar 6am this morning. Reasonable roads to Omaha, then progressively worse until we came upon a 15 mile section that had just been re-opened. This semi had just crashed. Tough picture but if you look closely, the dump truck front half is nose down and upside down.

Roads are now back to clear and the sun is out. Clear sailing ahead.

To learn how you can snap pictures and capture videos with your wireless phone visit www.verizonwireless.com/picture.

Note: To play video messages sent to email, QuickTime� 6.5 or higher is required.

Posted by Iowagriz at 1:14 PM No comments: