The Seven Oaks race course is one of the hardest of the Iowa MTB race series. 7-8 mile loop with 800 feet (I think) of climbing a lap. With the rainy summer we have been experiencing, I was doubtful on if the race could be run. However, the organizers did a fantastic job of getting a shortened course ready for us to race. 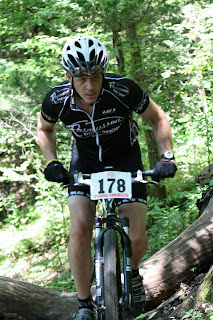 We were going to use the Cat3/Beginners loop, which has you climb the front side of the ski slope and then along the back side ridge and back to the bottom. Since the lap was only 3miles long, the Cat1/Expert group would be doing 6 laps. I heard estimates of 300 feet of climbing a lap. I did a quick recon lap before the race and knew it would be a fast race. Add that there were no slow people on the starting line, I knew we would have quick laps.

Thirteen of us started and quickly rode towards the opening climb. I took my place near midpack and thought that I would see what happened. Nate Cline had a frustrating start and I got past him at the top of the climb, so I was in 7th. With the knowledge that I am not even in the same riding zip code as Cam, Kevin, Michael, Jay and Kent, I was happy with my start. Ryan Feagan had been training hard for several longer races, so he was the unknown in front of me. 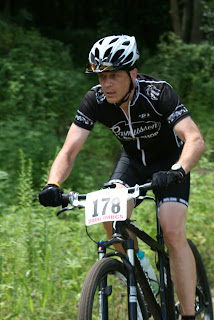 The first lap went by in a quick 15:30 and I had to back off for lap 2. Somewhere in there, Nate C got by and Josh Stamper (Omaha?) went around as well. I tried to recover with two 16:30 laps before getting the times back down closer to 16min. I thought that I was reeling Josh in, but ended up losing my chain on the last lap. The 10 second repair and remount was all that I needed to lose sight of him. I back it off for the last lap and rode home in 9th place overall, 1min behind Josh and 3min behind Nate. 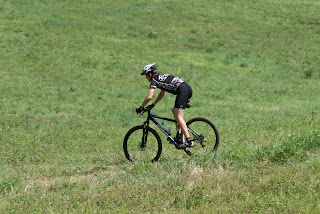 I ended up 2nd in the 35+ category and was very happy with that. Jay Chesterman is definitely faster and I have a lot of work to catch him. My goal was to beat Jason Alread (my teammate) in order to make up some points on him in the series. I didn't get a chance to talk to Jason to see how his race went, but on the drive home I saw him and Jim Logan (?) riding their bikes home. They probably rode out to the race, races, then home as training for Leadville. If that's the case, then it's a hollow victory.
Heart rate was slightly better for this race. I was much more consistent with avg heart rates within 2 beat per lap. Max was 179, I think averages were in the 167 range.
Pics from Angy Snoop. Thanks!
Posted by Iowagriz at 7:21 PM No comments: