I don't get to go into a race as one of the favorites very often (not in the past 15 yrs), so it's a fun challenge to see if you can hold up to the expectations. Last year, I was part of the 4-man winning team from Rassy's. This year, we hoped to hold onto the title. The team that took second last year was back (PAMBA team, from Peoria) and we found out, loaded for bear.

Rick did an excellent job in setting up our site for the weekend and we started at noon. After one round of 4 laps, we were neck and neck. After the second round of laps, they were up by a maybe five minutes (6 hours of racing). We weren't panicking as we had a few small mechanicals and they hadn't. Certainly, they would have problems in the coming 18 hours. 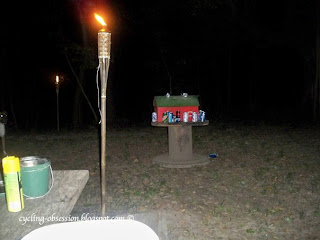 Ryan VanH's version of Farmville (beer hand-ups from the barn).
As we went into the night laps, we seemed to be running very smooth. Still running quick laps, but they were slightly quicker. I did my last single lap at midnight and settled into the car for 2-3 hours of sleep.

I woke up at 3am and got ready for my 4am laps. Overnight, we run two laps each in order to get some rest. Bill handed off to me and it appeared that we were now about 30min down (45 min laps on average). I decided to go as hard as possible for these night laps and see what I could get back. Although the mind was willing, the body was not able. I pulled a 55min and 59min night lap. I just could not get my heart rate up. By the time that I handed off to Rick, they were close to lapping us. 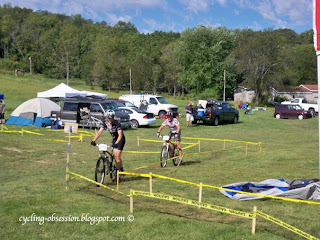 Entering the dismount area at the scorers table.
PAMBA lapped us around 6am and we put it into cruise control to ensure that third place couldn't make up time. In a way, it made the laps more enjoyable, but it wasn't fun coming in second place. Congats to the guys from Peoria, they pushed it hard for 24hrs and didn't let up. Stronger team this year and gives us something to push for in 2012. 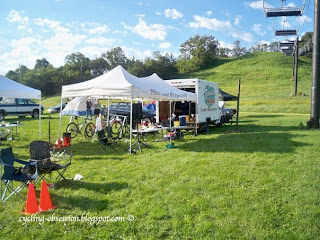 Our setup for the weekend. 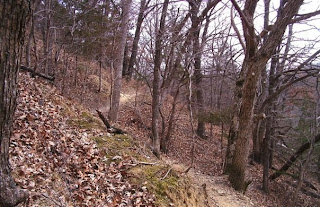 A taste of the trails (from a late fall pic). Not easy riding for 8miles. 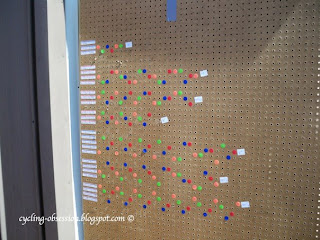 The final result. Three 4-man teams at the bottom, Three 3-man teams above us. I think we finished with 28 laps. 7 laps each, around 8 miles and 800 vert a lap.
Also: Congrats to Jason Dal for winning the 12 hour solo. Great effort and something he was gunning for all summer.
Thanks for the pics Courtney.
Posted by Iowagriz at 9:19 PM 4 comments:

Trying to get all of my thoughts together for a full post, but am having difficulty with time and thoughts.

Short story is that I thought I could get to the singletrack in 6th or 7th place. Pack of 17 took off and I found myself in 17th place. I guess "plan B" was in order....

I scrambled into 16th before the singletrack and then caught the pack with the inevitable crash that slowed places 10+. I passed a few and worked my way into 10th or so by the end of lap 1.

I passed a few more and a few others must have dropped. I had hoped to catch up to Jason Alread that I could see about a minute ahead of me. Alas, he was too fast and we finished in the same order. I ended up in 7th out of 17 and in 2nd out of the 35+ (to Jason).

Looking at a pic of the starting line, it all makes sense now. I see a team Radio Shack rider, last years 1 and 2nd place series riders, the top 35+ rider from NE, a top regional roadie and a genetic freak (in a good way) that crushes all in any riding or xc skiing contest. No wonder that they took off at a speedy pace. The fact that I'm a slow starter probably saved me and allowed me to pic off others and finish.

I'd like to say this was "plan C" and I executed it well, but I think it somehow just happened.

24hours of Seven Oaks coming up this weekend. I hope that the trails are dry.
Posted by Iowagriz at 9:03 PM 1 comment: