I forgot to add the commentary on the CITA trail day. We had about 20 people show up at Banner/Summerset on Saturday morning (despite the rain). We added a 22foot long bridge, a shorter bridge and did a bunch of berm/dirt work. I think that all but a short section is complete and that could be easily added at a later date. More pictures on Flickr and at the CITA site:
http://www.centraliowatrails.com/blog/ 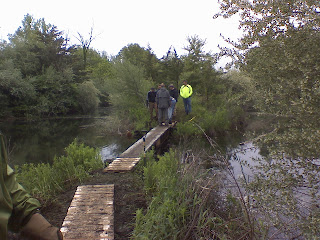 The crew installing the on and off ramps to the 2nd long bridge. I'm standing on the new 22footer. 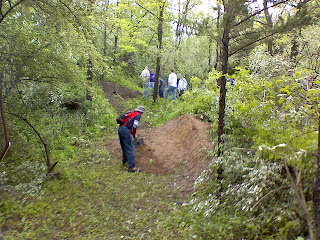 The view from the bottom of the drop-off and into Fox berm, the 2nd berm is a 180 degree turn around the tree. Looks like a lot of fun!

Posted by Iowagriz at 6:59 PM No comments:

Another hundy in the books

Since Monday was supposed to be a washout, I made the decision to leave at 5am on Sunday for my May Hundy. However, storms were forecast for the early afternoon, so I would have to hurry. 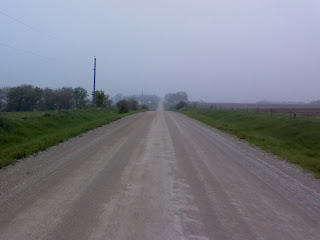 I decided to ride the route in reverse and take advantage of the forecasted winds. It was 60 degrees and humid when I left the house which meant no additional layers for the first time this year. I did some quick math and set a goal to finish in 8hrs. The winds were at my back heading west and the body felt good. I was eating breakfast on the bike and riding at a 14mph avg. As I turned north I didn't get the expected tailwind. I'm sure I had some help but it wasn't the 20mph northern ride I expected. Just outside of Redfield, I did have a cool moment with this herd of horses. They came running over to check out what I was doing. 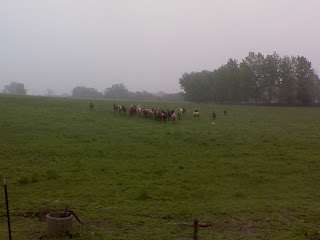 I concentrated on riding steady and didn't bother stopping in Adel. I think it was 10:30 when I arrived in Perry for lunch. Lunch was a little over 20minutes and then I saddled up for the hardest part of the ride. I did add a slice of pizza to the items below for lunch. Not the healthiest, but it works for me. 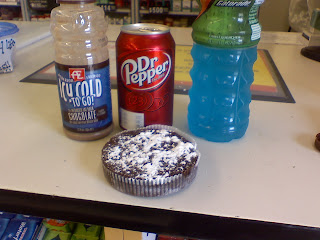 The winds had not yet shifted to the west, so I had a headwind or side wind for the next 30miles to home. This was the toughest part because I was sure that I wasn't going to hit my goal. It's funny how your math skills go out the window when you are exhausted. As I got closer to Granger, I realized that I could make it to the 100mile mark in under 7:30, so I set that as a goal for the next 10miles. The picture below was to remember my numbers at 100miles exactly. Overall, a result that I can be happy with. 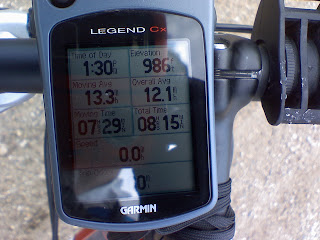 The total ride distance was 104.34 and the GPS info is here:
http://trail.motionbased.com/trail/activity/5765987#
4700feet of climbing and I think that most of it was in the 1st 30 miles. In fact, if anyone is looking for a 50mile loop, the first 1/2 of this to Adel and then into Des Moines would be a good one.
I do have a few more pictures on Flickr, but not much as I was just concentrating on riding on this day.
Posted by Iowagriz at 12:21 PM 2 comments:

Center Trails with the Little Ladies

Holly and I had a great Sunday with the girls. After a quick lunch we unloaded the bikes at Ashworth pool to hit the center trails. The girls on their new 26er's and Holly and I on the mountain tandem. The girls were here last fall on their smaller wheeled bikes and I was a little worried about how they would handle the new bikes on the trails. No problem! They handled it like pro's. We took J11 to Denmans and rode the 1st 1/2 of Denmans before bailing at the berms, then took the connector trail to the Trestle and back to the car. 1hour of riding and 5.2miles for the girls. No crashes and they rode the better part of the trails. In fact, they probably would have attempted all of it, but I had them get off for a few of the larger logs and tight squeeze trees (like the exit of little italy). Holly and I probably had a harder time on the tandem than they did on their bikes. Here are a few pics of the day: 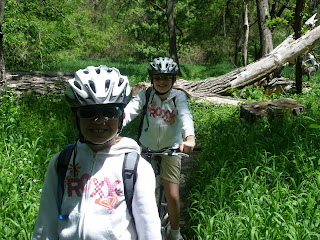 Maddie and Hannah sportin the fashion..... 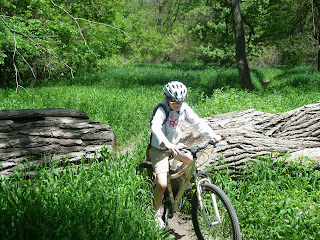 Hannah making it through the squeeze tree on J11. 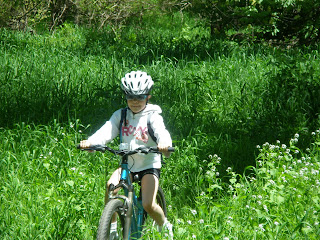 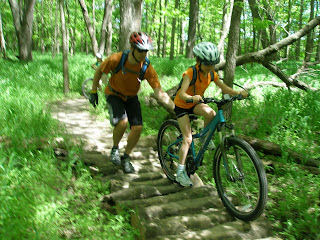 They both wanted to try this 15 foot log boardwalk in Denmans. I held their seat so they could power up and on top and then I let go about 1/2 way across. Maddie is showing perfect form by lifting her butt off the seat while applying power to the pedals. 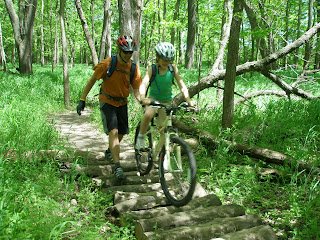 Hannah did just as well and made it across, probably did 1/2 on her own. She now knows that she needs a little more speed to stay stable for the full length.
I can't wait to get them out on the trails again. Maybe I will have them attend the Monday night rides at the Center with me. Either that, or I will start a kids night to get the local parents and kids out on the trails together.

Posted by Iowagriz at 8:38 PM No comments:

This past week was Bike to Work Week and we had great weather in Des Moines. I really noticed a lot of new bikers on the road. I was able to ride 4 of the 5 days into work and only missed the one day becuase I was lazy. In fact, on that day I worked only 3 miles from the house so I really didn't have an excuse. On Monday the locker room at work was jammed and people had to wait in line for one of the 2 showers. Both of the bike racks were completely full and some were locking their bikes to railings within the parking garage. While a pain, each of these are probably good problems to have.

Jason, Will and I helped to push the BTWW initiative within WF again this year. We won again and beat last years numbers. Everyone seemed to enjoy themselves and I do think that several will continue to commute in (at least once a week). See the Flickr link on the right for more BTWW pics. Here are a few from the Friday ride in from the west: 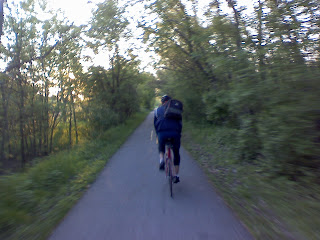 Each year, I seem to get a good artsy shot of Matt. This was on the Clive Greenbelt with my camera phone, he seems to be moving at warp speed. 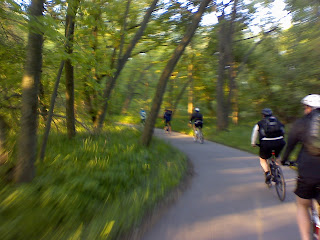 Another warp speed shot of the crew riding in. We had 5 in our little group from the Clive area, but we met up with at least 20-30 along the way. 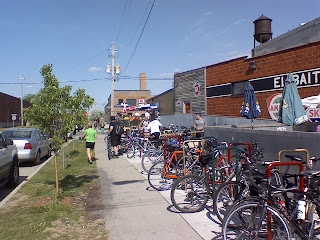 After work, everyone goes to el Bait Shop for handlebar happy hour. A bike friendly place with plenty of parking for us. We left by 5pm, but I bet it got busier about then. 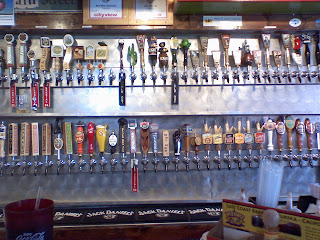 The pic that shows why Iowa bikers really love this place. Somewhere in the neighborhood of 200 microbrews on tap or in bottles.
Roundtrip for the commute was 29.25miles, here is a link to the Friday commute in.
http://trail.motionbased.com/trail/activity/5702563

Posted by Iowagriz at 8:09 PM No comments: 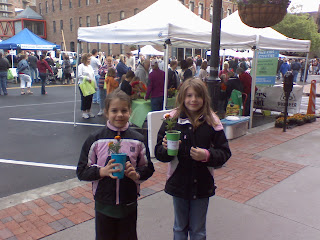 After Maddie's soccer game on Saturday, we went down to the opening day of the farmers market. The girls planted some free marigolds. We went shopping that afternoon for Holly and they repotted the flowers into some nicer pots. Some other gifts were added and we cooked breakfast to serve her in bed on Sunday.
Posted by Iowagriz at 8:31 PM No comments: 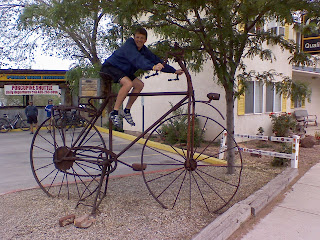 Thursday was the last day of the trip. My butt feels like I've been riding this bike all week. We shuttled to upper Porcupine Rim at 8am. 20mile downhill, all technical, but fun. Several crashes and flats, but everyone came out ok. 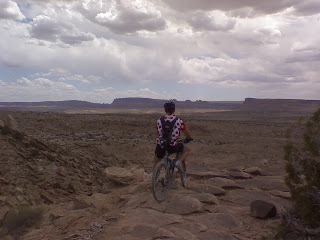 For day three, we drove over to Moab and rode the Sovereign trail. Out on the trail for a little over 4 hours in very warm weather. This pic is of GT, contemplating the meaning of life while overlooking the valley. 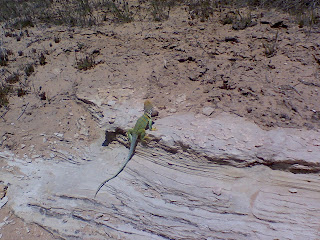 Lots of these little guys out on the trail. Today's riding was at the Loma exit. Rustlers Loop, Mary's Loop and Horsethief Trail. Good riding and very warm weather. More pics on Flickr.

Posted by Iowagriz at 7:38 PM No comments: 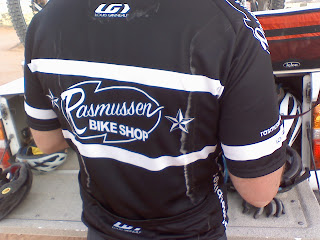 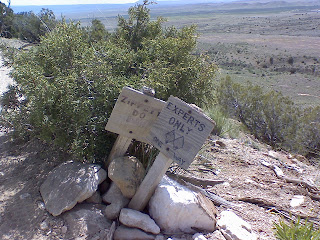 The first day in Fruita. We rode at road #18. A great time. It was sort of like a ski area. Ride up 2miles and then pick one on many singletrack downhills. This pic is from the entrance to Zippitty Doo Dah. A great trail that rides along the ridge. We made 4 or 5 trips up the road to pick a new trail each time.

Click on the Flickr link to the right for more photos. Due to the way that I uploaded them, start at the back and work forward.

19.9miles and 2955 feet for climbing/descending

Test of the blogging from the cell phone 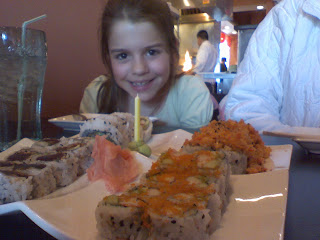 This works, but only allows me to upload one picture at a time. I'm getting ready to leave for a MTB trip to Fruita, CO and Moab, Utah tomorrow. Look for daily updates to the blog. I'll probably send the majority of pictures to the Flickr account (see sidebar).

BTW - this is a picture of the girls birthday dinner. The sushi chef places a candle for them in the middle of the Wasabi. Pretty funny! They love their sushi and miso soup. Holly and I just laugh about miso soup and simultaneously remember the late 80s, early 90s song from 2Live Crew. This is a family (g-rated) blog, so do a google/youtube search for their songs and you'll figure it out.