This past week was my (to be) annual trip with the girls on RAGBRAI. Last year, they each did one day. This year, they graduated to two days each. Since I raced on Sunday, we missed the first day and instead had Holly drive us to the start of day 2. Hannah and I woke up to a beautiful day in Storm Lake. We were on the tandem and rolled out of town to our first town and a breakfast stop. The pic below is of Hannah enjoying her "breakfast on a bun". Funny how she probably wouldn't eat this at home, but cheesy eggs and ham on a bun was just "delicious" on this morning. I guess riding 16 miles to breakfast on only a donut will do that. 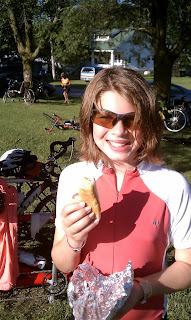 This day had the option for the Karas Loop century. RAGBRAI loops you around a short section of the course to add enough miles to equal a 100. This is a pretty big deal for cyclists and I asked Hannah if she wanted to attempt it. I didn't push it, so I was surprised when she said we should do it. The loop was about 50 miles into the route, so we had already been pushing a decent pace. She was a trooper and probably had less whining than me, but we completed the loop and moved on. We completed a little over 100 miles on this day. 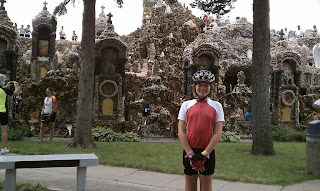 Above photo is of Hannah at the Grotto of the Redemption(?), I think in West Bend on day 1.
Day two for Hannah was from Algona to Clear Lake, the maps had it as a flat 60 miles. For some reason I had it as 50 (in my head). However, the maps mileage was off and we ended up with close to 66 miles on a very, very hot day (heat index over 100). We didn't eat or drink enough on this day and by the time Holly met us in Clear Lake, we were hot, hungry and thirsty.
Holly drove up to transfer/swap the girls for the next two days. She went to a laundromat to wash shorts for us while I setup the tent. Hannah apparently ate a Subway sandwich during this time and then slept from Clear Lake to home (two hour drive).
Maddie and I suffered in the tent that night as the heat index kept it nearly unbearable in the tent. We finally fell asleep near 1am and were woken up by campground noise at 5:30. Maddie is below with our tent (small quarters, but ok until they get bigger). 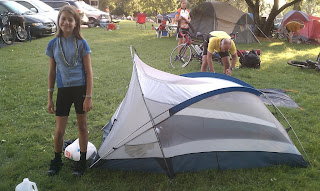 Maddie and I had an uneventful 55 mile ride to Charles City on this day. Only four pass through towns, so we didn't spend too much time off the bike. We did have a blast at Charles City. A great small town with cool old buildings. We went to the water park and lounged around, getting to bed and asleep by 10pm. 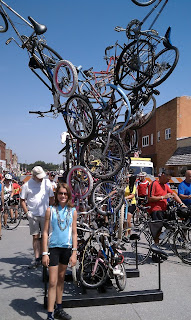 Maddie's second day was to Waterloo. We ended up with 87.6 miles (should have ridden a few more for her century, but Holly was waiting). This was a fun day with some great pass through towns. Parkersburg had a neat sculpture (pic above) of a bike tornado. This is the town that was nearly wiped off the map in 2008 and then had their iconic football coach shot last year (lots of ESPN coverage).
Overall, it was another great ride and time spent with the girls. They seem to really enjoy the 1 on 1 time with me and I enjoy the time and riding with them. We totalled 309 miles in the four days, about 22.5 hours of riding time and around 6000 feet of climbing (very flat route this year). Next year, Maddie gets to ride the century loop to earn her patch. Outside chance that they could do 3 days each, but that might be too much for dad.
More pics on Flickr.

BTW - Special thanks to Rasmussen Bike Shop for the support during the week. Greg and the gang took us in as family and the girls enjoyed the special treatment. Thanks Greg!
Posted by Iowagriz at 1:31 PM 1 comment:

Class is in session 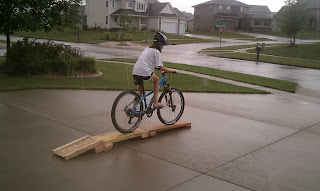 We raided the leftover's pile at a nearby construction site and created some skinnies for the girls to play on. They are all excited to add more and more of them.

Posted by Iowagriz at 9:19 PM No comments: 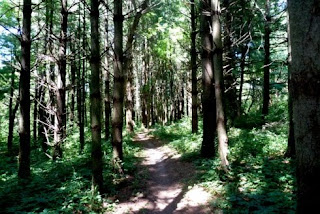 (typical view on the race course - stolen from Brad Keyes)

This past Saturday, Nate C. and I drove over to Scott County Park, just north of Davenport for the ScoCoPa Chase. As we drove over we talked about how hot the race conditions would be (mid 90s plus humidity) and how to race smart. I usually embrace the tough conditions because I know that others hate them. I figure that a positive attitude will help and we are all in the same boat, so any advantage (mental or otherwise) will help.

We arrived a good 90 minutes prior to the start and I only did a short 10 minute warm-up prior to lining up at the start. We were expecting a large field (being so close to Iowa City), but only had 18 or so at the start. Nate pointed out a few people to watch for and I initially lined up in the second row. But, then I had second thoughts on my fitness and the competition and moved back to make room for others. When no one stepped up, I figured what the hell and moved back into the second row. I was more concerned on if my training over the past month, and more importantly my week of rest, had been properly completed. I was hoping for a good race, but trying to be realistic in that my fitness may not be there yet.

When the whistle blew, I took it easy for the first 10 seconds. I was probably in 12th spot, but felt stronger and no one was coming around. A quick glance to the the others and they seemed to be working pretty hard (and I wasn't). Knowing that the course was full of tight sidetrack and passing would be hard, I decided to punch it on the last bit of the opening climb and hit the singletrack in about 10th position. It was hot and dusty, but the front group was moving well. The front runners were pulling a way when the guy if front of me washed out his front wheel and fell. I almost ran him over, but a quick trackstand gave him time to get out of the way. I was able to get close to the front group as the tougher section of the course came at us.

I caught up to a Bikes to You rider and he seemed to ride an OK pace, but after 5min I thought that I could go faster. However, was determined to keep me behind him. Since I didn't know the trail, he had the advantage from the front. When I tried to pass him, he would get a jump on the sprint and close down the passing lane. After a few minutes of this, Ryan Neipart had joined us. I let him buy hoping he could get around. At the time I didn't know who it was, but when the FORC jersey passed, I knew he would know the trails and be a good wheel to follow. Ryan tried hard, but couldn't get around either. However, the pace was taking it's toll on the leader of us three and he pulled to the side of the trail and stopped just after the start/finish. I hate to say it, but it was a boost of confidence to push someone to crack.

Ryan kept ahead of me by 100+ feet and I slowly reeled him in over the course of lap two. We also passed two other riders and I reeled Ryan in towards the end of lap 2. At this point, Nate and I had stashed a cooler in the woods. I grabbed my second bottle and used a tip from Nate and stuffed a handful of ice cubes in my jersey pocket. The race was using timing chips and as you crossed the start/finish line, the system beeped loudly. I heard his beep and started counting. Ryan had 15 seconds on me.

I decided to give it all on lap 3 and knew that I had to catch him in the first 1/3 of the course as that is where the most passing opportunities would be. I did catch him in the right spot and he let me by without any issues. I asked if he had seen anyone in front of him and the answer was no. I still pushed as hard as possible in hopes of seeing someone. Towards the end, I could hear someone, but couldn't find them. I did push it too hard around a corner and took a short side trip into the woods and over three smaller trees. As I stepped down, my calf cramped. It hurt, but it also told me that I was pushing my body in a good way.

In the end, I crossed the line in 2:07.48. Nate C. had finished just in front of me with a 2:07.10. I had finished 6th overall and 1st in the 40+ (2nd in 35+). I was really, really pumped at the end of this race. My heart rate average was 168 for the 2 hours and held consistent on each lap. It should be closer to 174, so I know that I have more in me. This was probably my best race ever at the cat 1 level, I raced smart, had to use strategy and rode hard. As a result I was actually racing and passing with others and not riding by myself. I will find out if this was a fluke on my next race this coming weekend.
Posted by Iowagriz at 8:27 PM 2 comments:

I was rummaging around in our photo box and found a bunch of old biking photos. I thought that others might like to see these. I hope to add a new set every couple of days, but it all depends on other work. 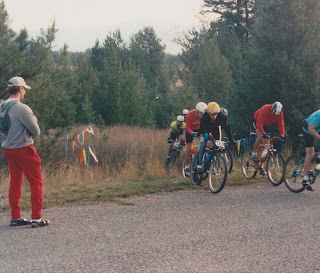 This is the start of the beginner race at Farragut State Park, just north of Couer D'Alene, ID. I think this is fall of 1994. This was my first season racing and needed to win this race to win the WIM (WA, ID, MT) point series.
I'm on the orange and yellow GT Karakorum with the red t-shirt and white helmet. Notice the guy in front of me with the Tioga disc rear wheel (or more likely the plastic inserts that made it look like a disc). 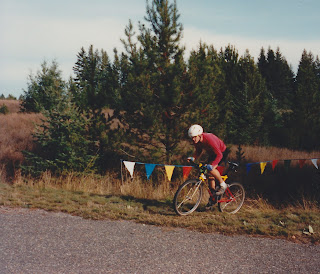 Coming through at the end of lap 1, I was in 2nd place and had 1st within my sights. That is a Schwinn Paramount helmet. I did have SPDs (1st generation). 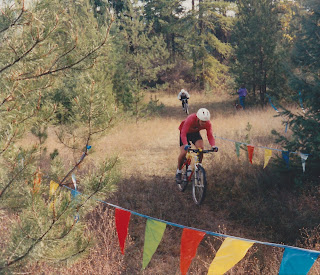 Coming through for the win! 2nd was behind me and I was dying. If it would have been a couple hundred yards longer, he would have passed me. 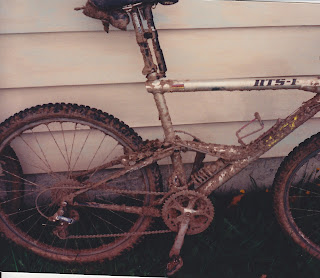 This was my 95 or 96 race bike. It was the 1st year of the GT RTS. I think this pic was after the 1st or 2nd race of the season and the mud was leftover after the car ride home. No V-brakes yet and I think this might have been 1st generation XTR 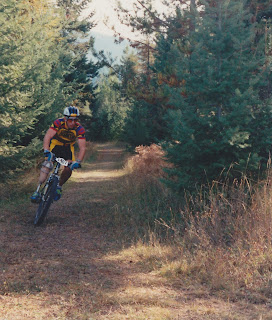 This guy is Steve Cook. He raced expert out of Missoula and was always in the top three. Notice that he was a lower leg amputee. Very fast rider and amazing technical skills. I lost track of Steve after he moved to Salt Lake City. Two years ago I read an article about him retiring from competing for the US Adaptive Ski Team. I believe he was the most decorated adaptive athlete for the US. It doesn't surprise me.
This last fall, at one of the cyclocross races, on of the promoters didn't believe that my racing license was below #2000. Everyone else's had five digits. Apparently, the old NORBA license system carried over from 1994.
Posted by Iowagriz at 6:49 PM 1 comment: