No pics from Tuesday on The Big Mtn outside of Whitefish. Skied with dad, brother Tim and Old ski buddy Timmy G. Good snow coverageand we found some good snow off piste. We slowed Timmy down from his usual pace and still did over 20k vert in about four hours. Taking today off to hang out with the parents and the rest of the family. Hopefully take the girls up skiing tomorrow afternoon and evening.
Posted by Iowagriz at 8:56 AM No comments: 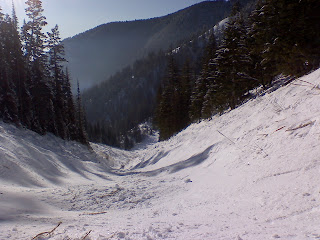 Those that have been there can appreciate the above picture of the chicken chute runout. Last run of the day after coming down west ridge. My legs were turning into jello. A few more pics on the Flickr page. 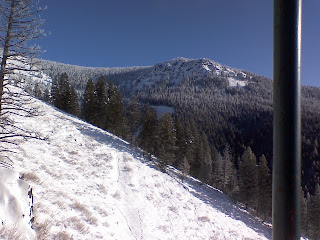 5 hours of skiing laps at Snowbowl. If I remember correctly. 2600 vertical feet from the top. Half laps at the top of 1200. Decent snow, hard in spots, but beats riding a trainer indoors.
Posted by Iowagriz at 1:06 PM 1 comment:

7 days from now, we should be sitting on a chair lift and not on the couch. I keep checking the ski reports and it looks like we will have perfect timing. The Big Mtn (never Whitefish Mtn Resort to me) is filling in nicely with a few inches a day. Here is their ski report video from Friday. Turn up the sound and check out John Dunnigan (local folk legend). His words are great!

"I'm dreamin of ways to survive, and I like deer meat with my minimum wage, it helps keep the dream alive." 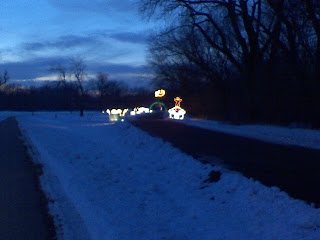 Test commute home tonight. Took the bus into work so I could be on time. Ride home through Waterworks Park and the Jolly Holiday Lights (better part of the commute in December). Most of the ride home was good, but need to find a safer way for the last 4 miles. Might try again on Friday, it depends on the overnight snowfall.
Posted by Iowagriz at 9:51 PM 1 comment: 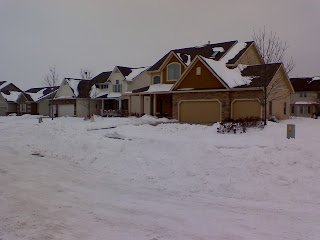 Look back at my last post and then forgive me for screwing up the bike riding in Des Moines. At that time, the forecast was for a few inches at most. We got 16" and now most of the bike trails won't be clear until spring.

I did go ride this morning for an hour looking for a clear route to work. 60th streets bike path is mostly clear and rideable, but EP True trail was not. I ended up looping back towards Jordan Creek and Ashworth to 156th and home. Somewhere near a 12mile loop. I hadn't ridden in 9 days so it was nice to get out. I spent the rest of this morning getting the rollers out and ready for training.

The pic is of the house and showing those out of state the remnants of the storm.

I've gotten back into training for next season. Laying down some base miles knowing that this decent weather will go away after Christmas. Since Thanksgiving I've ridden six of the past eight days for 187 miles. 29+ miles each of those six days. Tomorrow will be a short day but the next 10 days of the forecast look good enough to continue ridding outside. I'm hoping for 500 miles outside for December. I hit somewhere over 400 in November so if I have to ride inside during January and February, those base miles will carry me through the winter.

We did get temps over 55 on Monday and Tuesday, but otherwise it was been closer to 30 or 40. My new shoes are working great, but the fingers are still blocks of ice after an hour. I'll be pulling the mountain bike out and installing the pogies as those are the only way for me to keep warm.

Squirrel - saw at 4x4 pt buck on the ride home tonight. Behind the school just north of Walmart on 72nd. Could have been a 5pt, he was at least 6ft tall and my first instinct was "Elk", but then I realized that I was in Iowa. Tried to get the camera out in time, but he wandered off.
Posted by Iowagriz at 9:52 PM 1 comment: