Not sure what to title this one.

First, read this , then this. For more info on this event, go here.

I'd love to do this route as a tour, but this makes it much harder to think about attempting.

Ride safe out there. On the other hand, take risks and live your dreams as that is what makes life worth living.
Posted by Iowagriz at 1:52 PM No comments:

Lots of rain in Iowa the past 4-5 days. We went for a family ride after Sunday dinner and tried to loop around the new trail near 142nd and Douglas. I knew the creek would be high, but didn't think that we would have this much trouble passing buy. Keep in mind that this has receded since this morning. I hope that the trail isn't under-cut and damaged. 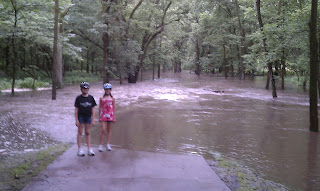 I spent 4+ hours helping out the shop on Saturday night at the Hy-vee Triathlon. We were setup within the bike check-in and helped folks out with brake and gear adjustments as well as pumping up tires. I probably pumped up close to 100 and I'm sure that the other 5 guys had just as much. This first pic is from a viewing stand, looking south to the lake with the swim. I think there was a little over 1500 bikes. 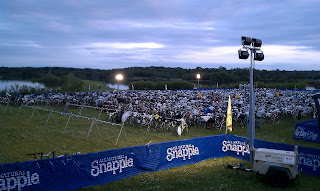 This 2nd pic is also of the bike staging area, but from ground level. Lot of bike, lots of $$$. 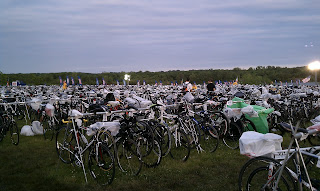 This last pic is actually from earlier in the week. I was in Rassy's and saw a guy picking his bike up. It is exactly the same bike that Holly bought as her first MTB in college. I think that the originally price was $279. I took her onto the trails around Missoula on this and she was a trooper. Looking back, I realize that she probably hated it, but did it so we could be together. I guess you could say that I owe Specialized for the last 24 years or so. I almost offered to purchase the bike from the guy on the spot. 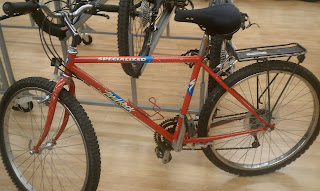 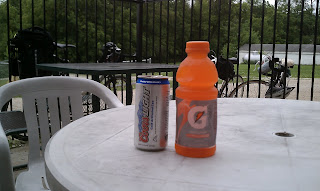 Posted by Iowagriz at 7:05 PM No comments:

Ida Grove was one of my favorite courses of the series last year and I knew it would be fun again this year. It doesn't reward any one skill, but an all around rider can excel here. It has one or two longer climbs, a few power climbs, some technical swoopy singletrack and some high speed sections. Add in a few log jumps and roll overs and you have a real fun lap.

JD and I drove up early enough to get a recon lap in. I wasn't going to waste the energy, but in the end, it was probably a good idea as it helped me memorize a few sections that would help in the race. The bike rode nicely in the pre-ride, the parts were working fine and the gearing was spot on.

Six of us toed the line for the Cat1 mens race. Jed Gammel, Nate Cline, Jason Alread and myself from the Rassy team, Jesse Bergman (the race promoter) and a new face. After the sprint off the line, we headed into the singletrack. I took the last spot with this normally fast crew and just hoped to hang on. As luck would have it, my chain jumped off at the start of the singletrack. I quickly dismounted and put it back on and then began my sprint to catch-up to Alread. I was able to latch back on and on the first long climb, continued the push to get in front of him. Jason was a little tentative as he had not pre-ridden the course and he let me go. I was having hopes to getting a small gap on him, but by the end of the 1st lap he was back on my rear wheel.

I let him take the lead on lap 2. The 2nd place singlespeeder caught us before the long climb and he put the pressure on. Alread kept up with him and they got a 15 second gap on me. I had to recover a little on this lap, but was able to keep them in my sights. They slowly increased the gap to 30-40 seconds. At the end of lap 3, I started to push hard again and began to catch back up. The singlespeeder was done with 3 laps and Alread has stopped for another bottle so I was able to get within 10 seconds. I tried to make the last effort to bridge, but he kept the pace up. I never did close it down. By lap 5, I was probably close to 30 seconds and kept it about that pace until the final climb or two.

By the end, Alread beat me by a minute. I think that Jesse had him by a minute as well. New guy won it. Nate got 2nd, Jed came back for 3rd after cutting a tire and having to stop and replace or patch the sidewall.

Overall, I was very happy with my progress. I gauge myself from race to race against the names that I know and by how far they beat me in the previous race. I know that Alread wasn't at the top of his game (I could see him trying to stretch out his back), but he beat me by 6min two weeks ago. It was fun to finally have a race in which I was closer to someone and wasn't racing by myself. It added an entire element of strategy that was fun to play with. Nate had beat me by 9min at Banner and I think it was a similar time for this race. He said that he had one of his best races, and he is riding very strong. I hope to somehow close that gap a little over the coming months.
Posted by Iowagriz at 7:40 PM No comments: 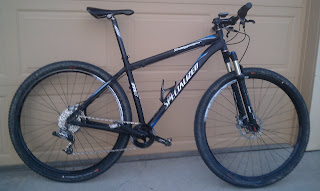 I just finished putting the final touches on the Stumpy. New tires, Roval wheelset, X0 cassette (11-34), X9 gripshift and e13 34-tooth crankset. Pulled off old shifters and front derailler. Weight dropped from 26.25 lbs to 23.5 lbs. Still have a possible .5lb available to drop in the seatpost, stem and bars. Need to tune and test before the race on Sunday. Not ideal to make all of these changes prior to a race, but they needed to be made sometime.

Thanks to Rasmussen Bike Shop for the race help this year. Great gang, great shop!