I meant to post this shortly after my last race.  I've been trying to figure out why my training seems so sporadic this year and yet, my results and fitness seemed to be better.  I'll have to chalk it up to having more miles and more experience in my legs.

The graphs below are from www.trainingpeaks.com; which is the site that I used to plan and track my training.  The first chart is my progress in 2012.  You can see three distinct Base phases (where the yellow and pink lines are far apart). Those were the long rides that I did in January through early March.  The fourth spread is the first Build phase.  And the blue line is the gradual build in fitness.  Now remember that the lines are all relative.  I don't think you can say that a blue line of 70 in 2012 means that I was more fit when compared to my blue line of 50 in 2013.  I don't know enough about that line or have enough years with this site to really determine if that is true.  Also, all of the blue dots are rides.  The higher the dot, the higher the intensity of the ride.  2012 was all according to plan.
﻿﻿﻿

The next chart is for the same time period in 2013.  You can see that I didn't get the same Base fitness rides in and that they were not for the same longer (two weeks) periods. However, (and it is hard to see on these pics) the blue dots are trending higher.  In other words, the rides that I have done, have been more intense. So not the same amount of hours or miles, but slightly higher intensity.  This makes sense from just comparing what I perceive last year was, compared to this year.﻿﻿﻿ 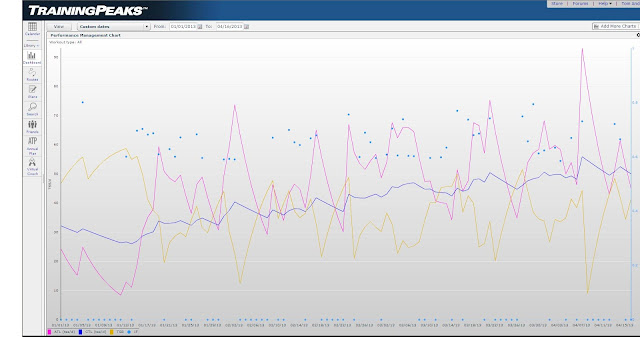 So what does this all mean????    I'm not really sure.  I do know that I felt better at Swanson at a higher heart rate and for a longer period of time.  I also know that my performance fell off at the 3 hour mark (indicating lack of base).  Either way, I need to work with what I have and move forward.  Syllamo 50 is in a month and I have a few more weeks to add the the base while keeping some intensity rides up.  I likely won't know how it all works out until about the 3 hour mark of Syllamo on May 18th.
Posted by Iowagriz at 7:41 PM